1994, Society Headquarters: This project involved the purchase of 13 Elm Street, the old Grange Hall, for Society Headquarters. The attic was insulated, the roof stripped and replaced with new shingles, the building was painted inside and out, new thermal pane windows were installed, dividers were made and erected for the museum, artifacts were placed in the stalls, and the archives assembled. 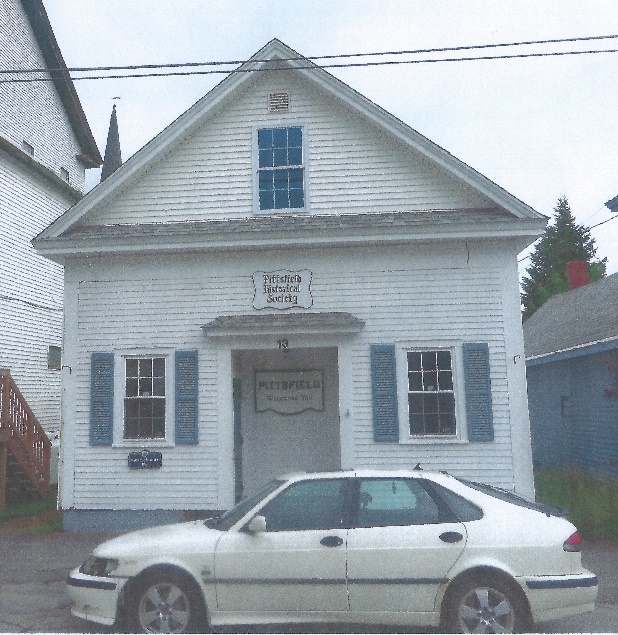 1995, Cemetery and Headstone Project: This project was initiated to locate, name, and have the town assume responsibility for Pittsfield’s church and family cemeteries, as well as clean them, record information on all of their headstones, and publish the results. This project included Floral Park and Hillside as well. It was completed by 2012, resulting in the publication of four books, two on Floral Park and Hillside, one on Pittsfield’s four church cemeteries, and one on Pittsfield’s 40 family cemeteries. 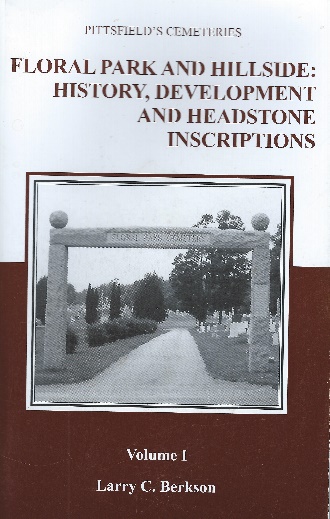 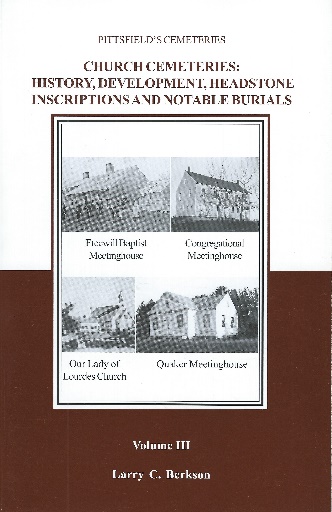 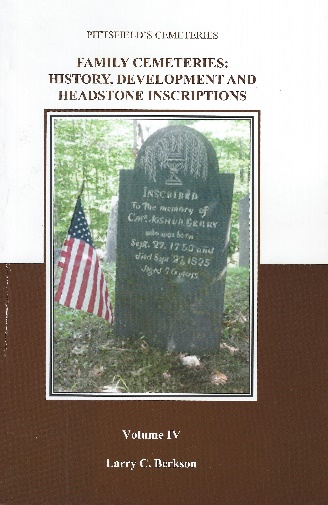 1995, Creation of Pittsfield’s Hall of Fame: The modest beginnings of recognizing some of Pittsfield’s illustrious people was begun, an effort that later emerged as Pittsfield’s Hall of Fame. To date 46 people have been inducted. The first installed was town founder John Cram. Others have been leading businessmen, industrialists, politicians, sports figures, benefactors, veterans, bankers, doctors, ministers, writers, painters, and judges. The project is ongoing. 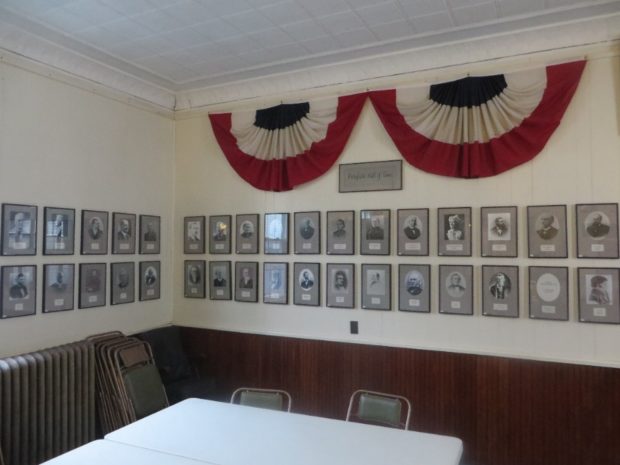 1997, Highlight Our History Project: The goal of this project is to place pictures of an historical nature in various business establishments in Pittsfield. Businesses and industries were located and pictures relevant to each of their locations were gathered, framed, and placed on their walls. This is an ongoing project. 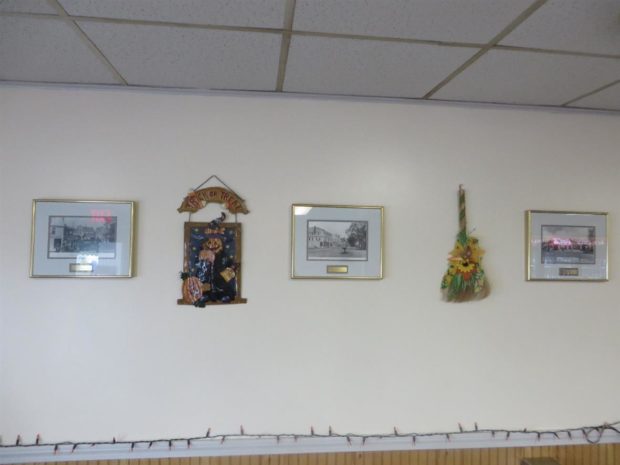 Pictures on the Wall at Town Pizza on 27 Carroll Street

1998, Building Markers: This project was established to determine the first owner or builder of Pittsfield’s early houses. Deed research was combined with information taken from newspapers about the origins of selected houses. Signs were designed and by the following year work on over 50 houses was completed and 25 placed throughout the community upon request. The project continues today. 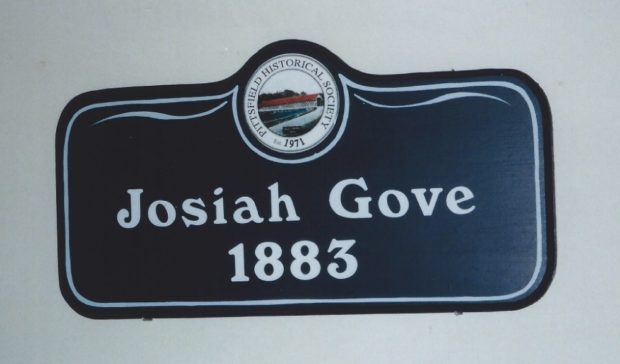 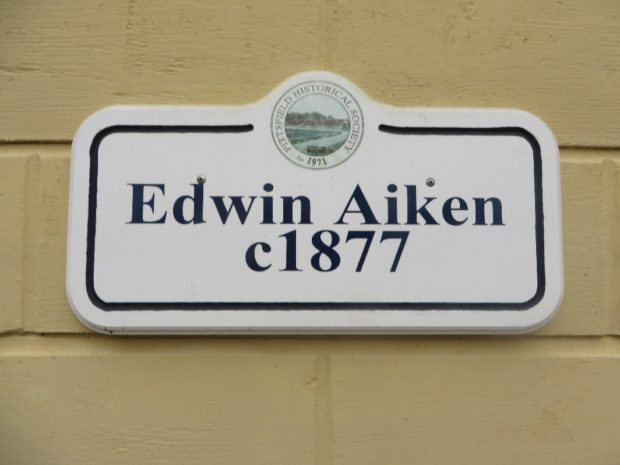 1999, Historic Walking Trail: Aluminum signs costing approximately $1,500 each were placed at 35 historic sites along a 1.5 mile circuitous route around the Village. Each contained historical information about the site. A pamphlet containing a map was published to aid walkers in locating the signs. The total cost of the signs was $52,000 all raised by members of the Society. They were installed by members of the Society. 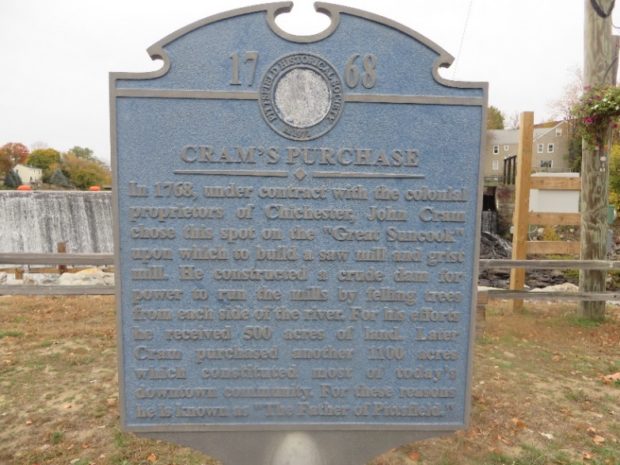 2000, Lyman Park: Lyman Park on Carroll Street was completed in 2000, after several years of effort. It serves as the beginning of the Historic Trail and includes a huge kiosk comprised of a granite block with an aluminum map affixed on its top denoting the route. It is covered with a cedar shake canopy with filigree copied from the Starters Stand at the old Pittsfield Fair. The central area of the park is cobblestone, a huge granite block wall bounds its backside, and flower gardens line its walkways. Additionally, there are plaques honoring those who contributed to the effort. All of the work was performed by volunteers. Well over $100,000 was raised for the project, again by members of the Society. 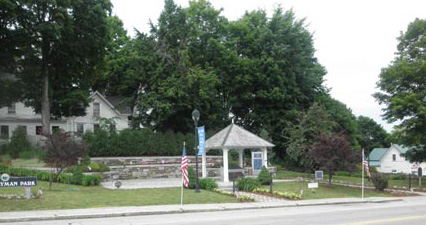 2003, Congregational Church Picture Project: The Society was asked to develop biographies for early members of the church whose pictures had been recently found. A loose-leaf binder was prepared with the information and now rests in the entryway of the church below the pictures on a pedestal. 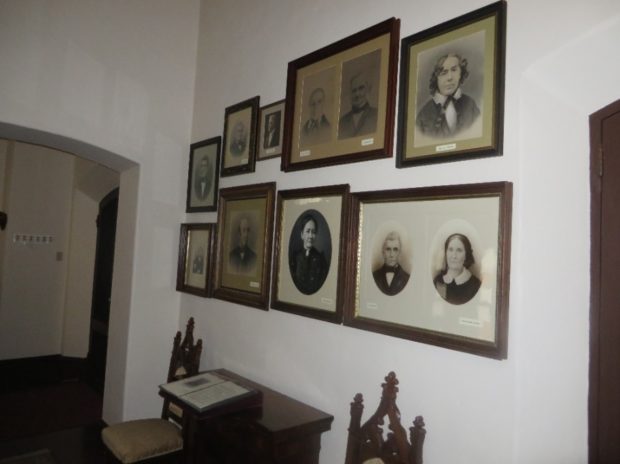 2003, The Cotton Mill Bell: The old bell from the Cotton Mill, originally brought to Pittsfield in 1827, was located in Exeter, donated to the Society, and returned to Pittsfield. The carriage was sandblasted and painted, a pad was poured, and a brick base erected near its original location on Factory Hill, and the bell placed atop of it. A dedication ceremony took place on Old Home Day with approximately 150 people in attendance. A sign was placed nearby explaining the bell’s history. 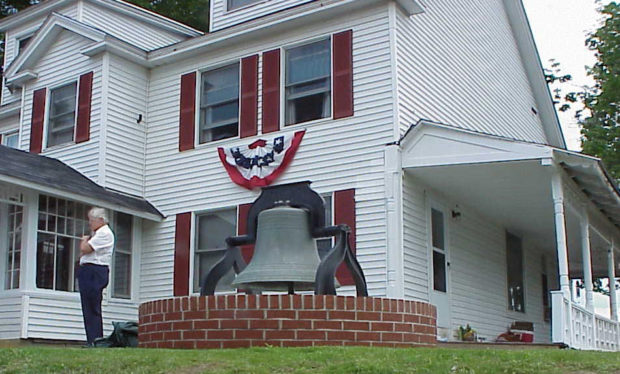 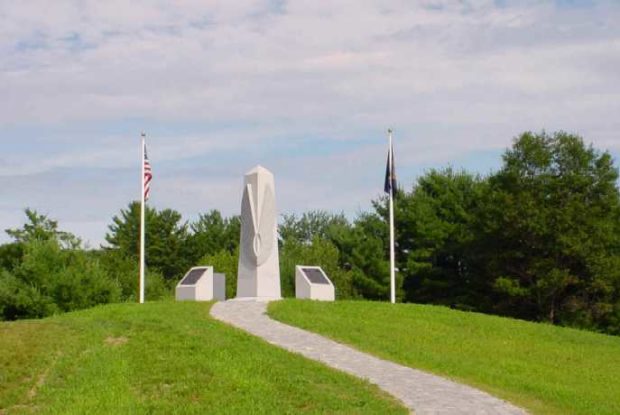 2005, Society Retreat: The Society held a retreat at the Common Man in Concord, consisting of 45 Pittsfield residents representative of the community seeking a blueprint for the future. Four topics were discussed: programs, projects, membership, and fundraising. Small groups met and discussed each topic accompanied by a facilitator and recorder. The five hour event produced dozens of ideas and recommendations which were compiled into a document for future use. 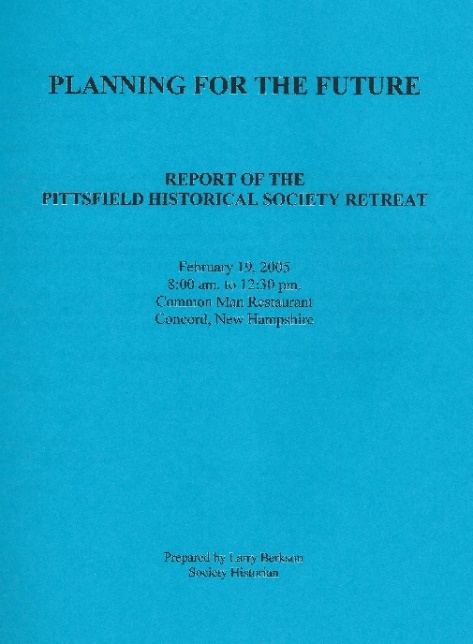 Manual Published After the Society Retreat

2006, Jonathan “Jocky” Fogg State Marker: Work obtaining a State marker for Pittsfield’s Revolutionary War soldier Jonathan Fogg was completed and a dedication held on May 28. A ceremony was held on site on Factory Hill where the marker is located. Fred Noyes, originator of the idea, was guest speaker. The sign outlines his trials and tribulations during the war including imprisonment in a Quebec jail after Benedict Arnold’s ill-advised attempt to take the fort there. 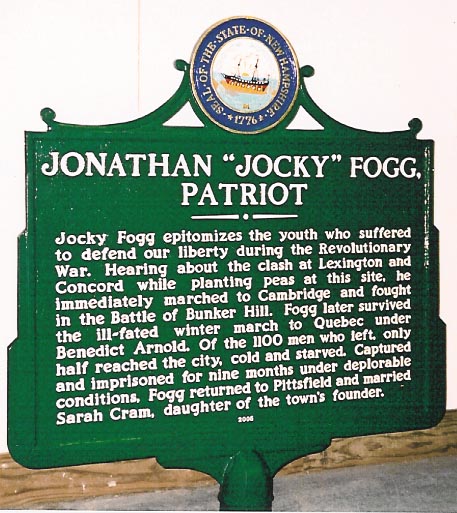 2006, New Wings on the Veterans Monument: After a year of planning and fundraising two new wings were added to the Veterans Monument in Dustin Park which to that date had recognized only World War I and II, Korean, and Vietnam Veterans. Etched into the left wing were the names of Pittsfield soldiers who served in the Revolutionary War, War of 1812, Mexican War, and Spanish-American War. The right wing will allow placement of veterans’ names who have served since Vietnam. Speakers at the dedication included Reuben Leavitt, Commander of Peterson-Cram Post, American Legion, and Robert Moulton, Adjutant of Peterson-Cram Post, American Legion. Colonel Robert Zahn, one of Pittsfield’s doctors in the Army, gave the keynote address. 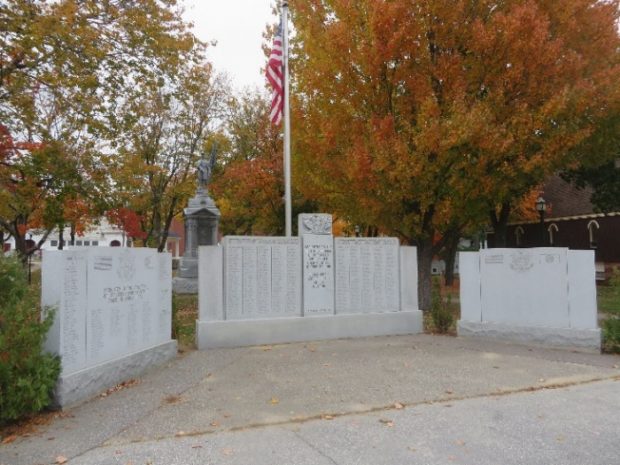 Dedication of the Wings to the Veterans Monument

2007, The Gate Mechanisms Display: As a result of the Mother’s Day Flood in 2006, the gates of the Factory Hill Dam were replaced by the State. The old gates were obtained by the Society, a pad poured at the bottom of Factory Hill near where they were originally located, and they were affixed to it. A sign was placed in front of them outlining their history and origins. 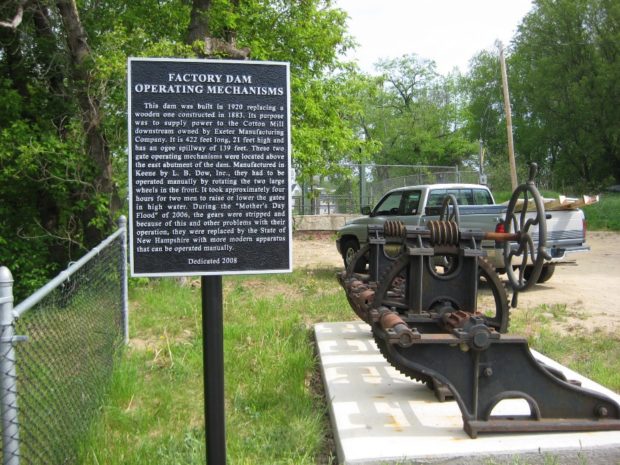 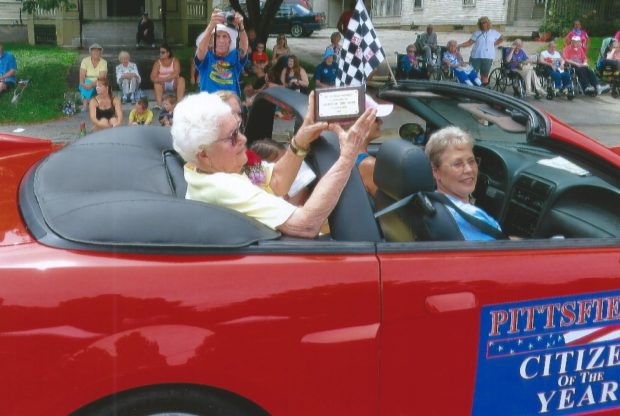 2009, Cemetery Identification and Sign Project: This four year project identified, named, and made signs for all of Pittsfield’s cemeteries except Floral Park and Hillside. The signs were made by David McGhee and placed by volunteers of the Society. 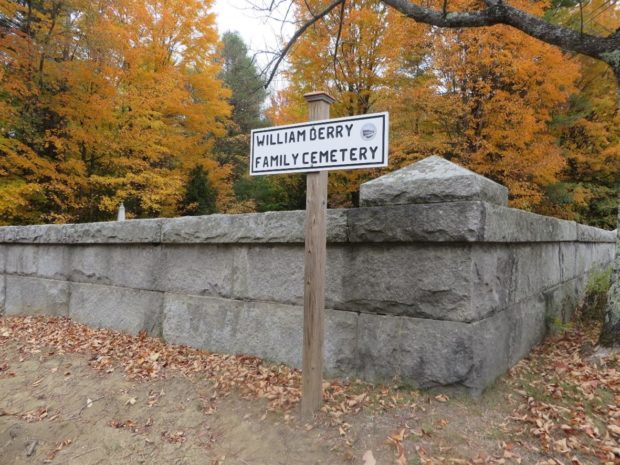 2010, World War II Veteran’s Project: Initiated in 2006 by Larry Berkson and Robert Moulton, the project was initiated to collect information and pictures of Pittsfield’s World War II veterans. Numerous interviews were conducted with living veterans and children of deceased veterans, newspapers were perused for published letters written home, base assignments, theaters of operation, and awards given. The project culminated in a five-volume set of books published on these veterans. 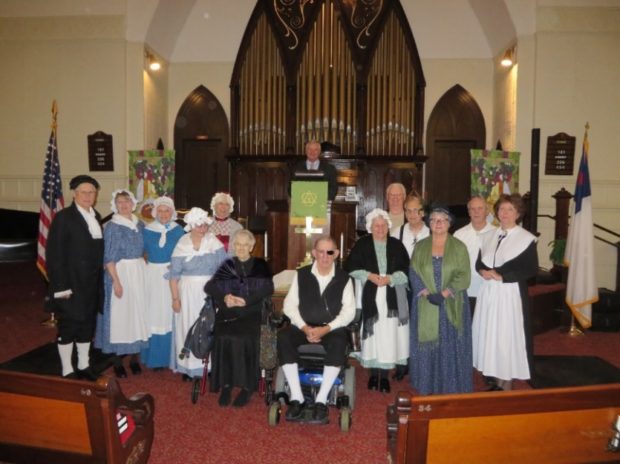 Docents at the 225th Anniversary of the Congregational Church

2016, Steam Pump Display: A huge steam pump used to suppress fires at the old Cotton Mill was donated to the Society. It was sand blasted, painted, and placed on a concrete pad on the mill property. A sign was placed there outlining the history of the pump, its maker, and use. 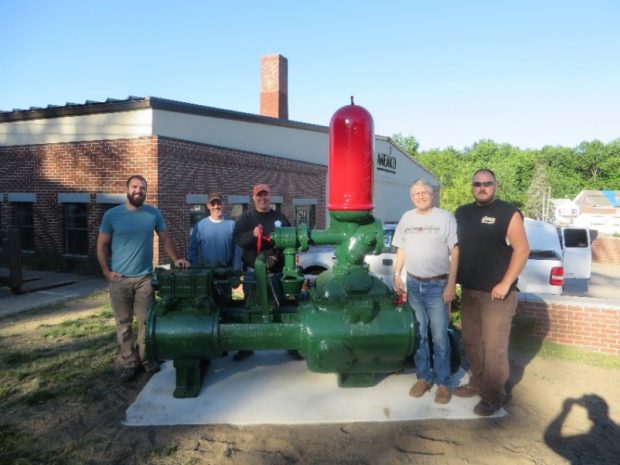 Please email your comments and questions.